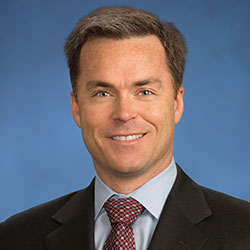 Chris Buddin is global head of the Clean Technology and Renewables (CTR) Group. He also leads the Technology, Media and Telecommunications Group's focus on the Internet of Things sector. Chris joined Goldman Sachs in 2011 as a vice president and was named managing director in 2012.

Prior to joining the firm, Chris worked at Credit Suisse in the Technology Group from 2000 to 2011. While at Credit Suisse, he was one of the founding members of the global alternative energy group and was head of the Clean Technology practice.

Chris earned an AB in Economics from Stanford University.